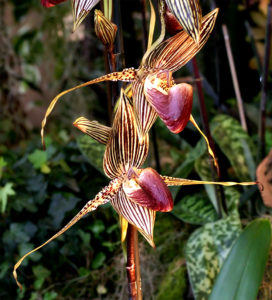 Orchid lovers can be seen in all parts of the world growing different species of these flowering plants in their gardens and pots inside homes. Many orchid species are rare and found only in their natural habitat. There are also some species that have been labeled as endangered because of their over plucking and the inability to be grown in home conditions. Orchids come in all shapes and sizes and there are more than 20000 varieties of these plants. But there is one species of orchids that takes the cake when one looks for world’s most expensive orchid. The credit goes to Rothschild’s Slipper Orchid. There are orchid enthusiasts ready to pay as much as $5000 for a stem of this species of orchid. Let us know some facts about this expensive variety of orchid.

Rothschild’s Slipper Orchid is also referred to as Sumazau Orchid locally in Sabah, a state of Malaysia. Sumazau is the traditional dance of Sabah and the two long lateral petals of the beautiful flower of this orchid plant resemble the outstretched hands of a dancer dancing Sumazau. The flower can hold both petals horizontally despite them being very long. This gives a very distinctive shape to the flower and ads to its glamour.

This beautiful and rare orchid plant was discovered by Rothschild in the rainforests of Kinabalu. This plant grows at a height of 500-1200 meters above the sea level. Though it is mainly a terrestrial plant, it is also seen growing over the leaf litter as a lithophytes near rivers and cliffs. The flowers of this species have a petal with red spots. This is taken as a crowd of aphids by some parasitic flies. They are attracted to the flower and help in its pollination.

The stem of Rothschild’s Slipper Orchid is red in color and devoid of leaves. It can hold up to 6 flowers but usually 3-4 flowers are seen arranged on the stem of the plant in its natural habitat.

Because of its high demand and price, the flower of Rothschild’s Slipper Orchid is being over plucked and is believed to be close to extinction. Today this species of orchids is found only inside Kinabalu Park and this is why it is so expensive.