The White Egret Orchid is perhaps the most delicate of all orchid plants. Its flower is so white and so beautiful that it reminds one of the white bird called egret. It is a heron with an all white plumage. It is a wild variety of orchid and even though it is native to Asia, it is grown in United States also. Its flower looks just like the egret in full flight with its distinct white plume. It is a terrestrial species of orchid that can grow in full as well as partial sunlight. It requires a lot of water and a soil containing full moisture. Interestingly, this orchid needs to be kept dry during winter season. The White Egret Orchid is a terrestrial plant which means you can grow it in your ground in the garden.

Leaves of white egret are like grass with each one being 5-20 cm long and 1cm wide. There are up to 7 leaves in a plant with new leaves getting formed during spring. These new leaves start as leafy growths in spring but become full sized leaves by the time it is summer season. These leaves are arranged one by one on a stem that can grow up to 50cm. The leaves grow out of the tuber below the ground and so they remain pretty close to the ground. 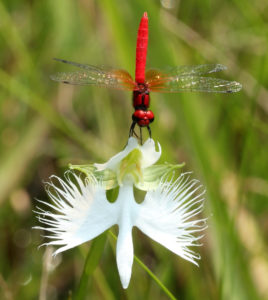 Facts about the White Egret Orchid

It is the white and delicate flowers of white egret that steal the show and easily become a centre of attraction when grown in a garden. There can be 1-8 flowers on a single stalk with each flower being up to 4cm wide. The sepals are green and small but the lip and the petals are snowy white in color. The lip of the flower is extravagant in shape and size having three lobes. Bigger lobes extend laterally and they are fringed while the third lobe is small and pointing downwards. In fact it is the arrangement of the larger lobes that look like the body of the egret while the petals make up the wings of the egret in full flight.
The White Egret Orchid grows out of a tuber which is only a few centimeters long. This tuber has a network of roots and it serves as the source of energy for the plant in the early part of its growth. Later on, new bulbs are formed from this network of fleshy roots while the first tuber slowly dies down. There can be up to 3 bulbs to take care of the white egret for a long time. Interestingly, even the roots die after a period of time and the bulbs themselves allow growth of new plants.

Growing White Egret in your garden

If you wish to grow the White Egret orchid, make sure you provide very wet conditions as the plant does not survive in dry conditions. You can grow sphagnum moss around this plant to make sure it gets enough moisture. But keep the plant dry during winter season otherwise its tuber will easily rot. The White Egret grows beautifully in the company of other bog plants like pitcher plants. Plant the bulb early spring close to the ground surface (just 1cm below the ground) and allow enough sunlight to fall upon it. Do not lose patience as White Egret Orchid can take weeks to grow out of ground. But once it does, make sure you water it heavily.