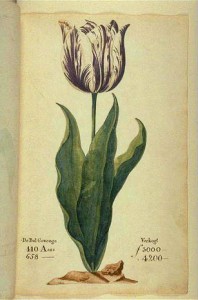 Tulips are native to Persia, where the local population commonly displays them in their turbans.  Europeans first discovered this flower and asked what they were called.  The Persians gave them the Persian name for turban, which is “tulip”.  This confusion began the great storied history of Tulips.

Europeans had never seen a flower with such intense color before.  This made the Tulip very intriguing, so they brought some back to Europe.  They quickly found out how tolerant the Tulips were to the winter cold.  Tulip growth expanded rapidly in the Netherlands, and so began the “Tulip Mania” era in the history of Tulips.

The Netherlands found that Tulips grew very well in the cool temperatures they could provide.  They quickly began to mass produce and sell Tulips on a large scale.  Tulips become a symbol of the wealthy in the early 16th century in the Netherlands, during a time when the Netherlands were in the middle of the lucrative East Indies trade.

This rise in popularity triggered an abundance of research on how to care for and propagate these new flowers.  Scientists discovered that a Tulip-specific mosaic virus would break the Tulips into two colors, meaning the flower would produce two different colors instead of the traditional one.  The plants affected by this virus were rare and highly sought after. 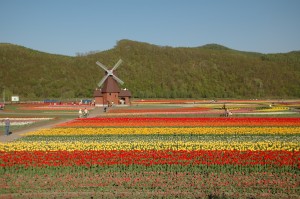 The desire for and rarity of the flowers brought forth large quantities of buyers, but not enough plants to provide for them all.  According to the principles of economics, prices will rise if there is not enough supply to meet the demand.  Many businessmen began growing Tulips to become very rich and powerful.

At the height of Tulip Mania, prices were so high that most people couldn’t afford them on a year’s salary.  In a magazine cut-out from 1637, we see a Tulip known as “the Victory” for sale costing 3,000 – 4,150 guilders depending on size.  That is a hefty sum when a skilled craftsman averaged 300 guilders a year.

The prices steadily grew over a short amount of time, until they got to a point where no one could afford to buy them except the people who sold them themselves.  At this point in the history of Tulips the price dropped back to normal almost overnight.  This sent a shockwave through the business community and led to a lot of businessmen losing a lot of money.

To this day, this significant point in the history of Tulips is used as an example in the economic world.  They nickname huge market bubbles like that “Tulip Mania”.  This shows how a single flower can mean so much to the world.

One thought on “Tulip Mania – The Economic History of Tulips”