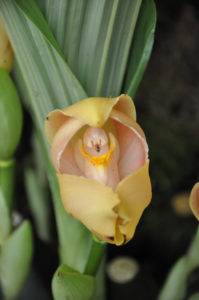 The orchid species overall produces many amazing flowers but none is more so than the Anguloa Uniflora which has flowers that resemble swaddled babies. This beautiful orchid was discovered by botanists Antonio Pavon Jimenez and Hipolito Ruiz Lopez from Chile and Peru in a ten year long expedition from 1777 to 1788. It took scientists another ten years before this orchid could be named Angula Uniflora in honor of a botanist Don Francisco de Angulo. who also happened to be the Peruvian Director General of Mines.

The Swaddled Babies Orchid is one of the smaller species of orchids. Its plant grows up to a height of 18-24 inches only. One can see pseudo bulbs that are conical in shape just below the thin and pleated leaves of this orchid. However, the highlight of this orchid, without a doubt, is its complex flower that looks like a baby cuddled and wrapped inside a swaddling cloth. The flowers are unusually large in comparison to the size of the plant. These amazing flowers are often a creamish colour or completely white and are waxy in nature. Another interesting fact about these flowers is that they are extremely fragrant. They usually bloom during spring season. 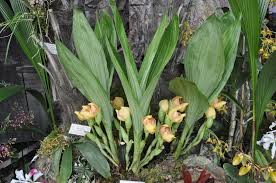 In some places, the Swaddled Babies Orchid is referred to as tulip orchid because of its resemblance to tulip flowers. The exterior part of the flower, surrounding the babies, has petals arranged in an overlapping fashion just like the flowers of tulips.

In natural conditions, Swaddled Babies orchids are found on the floor of the forests in high elevations in the Andes regions of South American countries such as Peru, Colombia, and Ecuador. These plants encounter prolonged wet and dry weather conditions in their natural habitat in these mountain forests. But if you wish to grow them in your garden, you need to give them conditions of high humidity. As a result experts suggest greenhouses for growing this species of orchid. Also, the Anguloa Uniflora orchid requires dappled lighting that is naturally available to these plants in their habitat.

Keep the plant in a plastic pot with multiple holes for drainage. As far as soil is concerned, a mixture of perlite and bark is considered best for growing these orchids. You can add some peat or charcoal to create optimal natural growing conditions for your Swaddled Babies orchid. Add fertilizer to the medium every two weeks throughout the year.

You will need to keep the growing medium moist throughout the development of the plant. Water it every 5-6 days during summer and a little less during winter months.

If you want the flowers of your Swaddled Babies Orchid to be big and healthy, you need to maintain optimum levels of humidity. Misting your plant for4-5 times in a day during summer season is considered beneficial for developing thick blooms.

Although many find it difficult to maintain these optimal growing conditions, it is well worth the troubles because of the sweet scent and the beautiful flowers of Swaddled Babies Orchid.

Facts About The Swaddled Babies Orchid