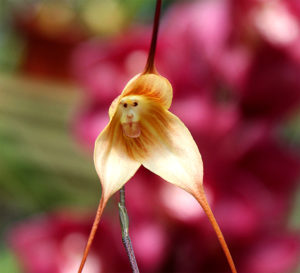 There are many orchids that bear flowers looking like animals and birds. But the one that is really amazing is the one that looks like the face of a monkey. This orchid called Monkey orchid is aptly named because of its striking resemblance to the simian primates. It is really surprising but Mother Nature has literally dittoed the details with two dark eyes, eyebrows that are fuzzy and dotted, a nose that is furry, and even the beard that one sees on the face of the simians. This is a very rare orchid so chances are that you might not see it in person. It grows at a high altitude of 3000 feet and more in the Cloud Mountains of Peru and southeastern Ecuador.

However, for those interested in having this prized addition to their home garden is that this rare orchid can be grown in cold to warm weather and it blooms all round the year. The most interesting fact about the Monkey faced orchid is that it smells like ripe oranges to easily make it the centre of attraction of any garden where it is grown. However, it is a little ironic that its flower smells like ripe oranges as with a face like a monkey, you would expect the flower to smell like bananas, right?

The Dracula part of the name of this orchid stems from two long spikes from the sepals that look like fangs of Dracula as described in movies and fiction. One fact that many people are not aware of is that the scientific name Orchis Simia derives from the fact that this orchid plant grows from two oval shaped tubers that look like the testicles of a primate. The Greek word Orchis means testicles.

Monkey orchid is a perennial orchid and it has a very long life of many years. However, a plant starts to flower after 7 years of its germination requiring the owners to be patient to see the monkey faced flowers. But once it starts to flower, you can expect the plant to flower every year for nearly 19 years.

Facts about the Monkey Orchid

Leaves of Monkey Orchid are green in color and linear in shape. These leaves are rhizome and fleshy. A lot has already been said about the monkey faced flowers of this orchid. Interesting fact is that the flower of monkey orchid can be in different colors like red, purple, pink, blue, orange, white, green, and even brown. The three petals of the flower can have dots, stripes or bear no particular pattern yet look like the face of the monkey.

The best conditions for growing monkey orchid in your garden are temperature of 6-8 ℃ (42-46℉) at night and not more than a temperature of 20℃ (68℉) during day time. This orchid requires a high humidity level of more than 65%. The soil should be made up of bark and sphagnum moss. Choose a pot that is large and has many holes in it. You can grow this orchid by planting the seed or through vegetative reproduction. The best thing with this species of orchid is that it can be grown any time of the year as it is perennial in nature. The size of the monkey orchid remains between 20 and 50 cm. It requires heavy amount of water and shady conditions.