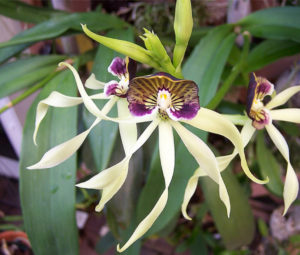 Earlier referred to as Encyclia Cochleata, the Green Squid orchid is an epiphytic orchid that is native to Central America and the Caribbean. However, it can also be occasionally terrestrial and seen growing on the ground. The flowers of this orchid are unusual not just in their resemblance to Green Squids but also because of having their column above the labellum. In fact, the labellum looks like a hood over the column. Despite being a common plant in Central America, the habitat of Green squid orchid is slowly shrinking because of its constant poaching. Thankfully, this is an easy to grow orchid at homes and seen commonly in the gardens of orchid hobbyists all over the world. One interesting fact about Green Squid orchid is that it is the national flower of a small country called Belize in Central America. It is called Black Orchid there.

If you have never seen this orchid before, you might be taken aback because of the shape of its flowers that look like an octopus or the squid with 5 legs dangling below its head. Green Squid orchids may be tiny in some places but they can be rather large in other places. One disappointing fact about the flowers of this orchid is that they are not fragrant at all despite having such unique shape.

Leaves of the plant

Green Squid orchid can bloom for up to 6 months through inflorescence which can hold several flowers. These flowers keep opening one by one and look wonderful even though they are not fragrant. The sepals and petals of the octopus shaped flower are lime green in color which is in sharp contrast with the dark purple or maroon lip. In addition to the shape, it is the presence of spots and stripes that make it look like a clam or cockle.

This species of orchid requires high humidity for its roots during its growth period. The plant requires moderate to heavy watering which can be lowered once pseudobulbs have become strong. The medium inside the pots should be quick draining. The medium should be made up of lava rock, river rocks, charcoal, fir bark, pieces of broken pots, and frn tree chunks. Water the plants 3 times a week if you live in hot weather but only once or twice if you live in cool weather conditions.

You will be pleasantly surprised to see the plant flowering any time of the year once the growth has become mature. The spike can continue to bloom for 3-6 months with flowers that are 2-3 inches in size.

Facts about the Green Squid Orchid