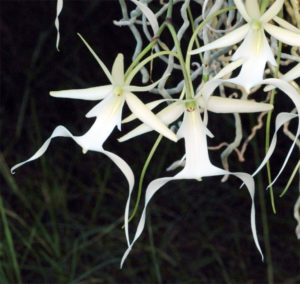 The look of these Ghost Orchids look similar to Green Squid Orchid (Encyclia Cochleata) or the Hanging Naked Man Orchid (Orchis italica). They also resemble the look of a frog but they are actually most known as Ghost Orchids.

Ghost orchid is a perennial orchid that is an epiphyte in nature. Lindenii in its scientific name is actually a name of a famous botanist from Belgium. This orchid was identified by Jean Jules Linden in 1844 in Cuba. It is a unique plant in the sense that there are no leaves and what one gets to see is only a thin network of roots wrapped around the branches of the host tree. These roots produce spikes that grow and bear flowers. The reason why this orchid is referred to as Ghost orchid is because of the fact that its flowers appear to be suspended in air like a ghost.

Facts about the Ghost Orchid

It is a rare species of orchids because it is very difficult to cultivate in home conditions. It loves its natural habitat that includes marshes and swamps where there are a lot of damp and humid conditions. It is difficult to identify this orchid even in its natural habitat because their roots grow on the branches of trees. The roots perform the functions of photosynthesis and they also help to absorb moisture for the plant. These roots have different shades like grey, green and white and they blend well with the color of the bark of the tree on which they grow. As these plants have no leaves and bloom for a short time period (3 weeks during April and August), it is easy to overlook them even in their natural habitat. One ingenious method to identify this orchid in its natural habitat is through the smell of this plant. Ghost orchid produces soap like smell when it is blooming.

If you take a look at the flowers of this orchid, you see either a white frog flying in the air or a ghost floating in air from here and there. This could be quite intimidating for anyone moving in the natural habitat of this orchid in Everglades or a forest in Cuba. As far as structure of the flowers is concerned, it has three sepals and three white petals. What is surprising is that Ghost orchid produces only one flower at a time. However, there have been plants that produced up to 10 flowers at the same time. After maturing, Ghost orchid plant can go without flowering for many years.

The flowers of Ghost orchid bloom are seen blooming between May and August every year. The flowers can grow up to a size of 4-5 inches. These flowers last up to a period of 14 days. The pollens are secured deep inside the flower that are accessed only a by a giant moth with large antennae. Pollination can be done by hand by using cotton swabs and then inserting these swabs into the flowers of the female ghost orchid plant.

It is very difficult to grow Ghost orchids in home conditions as you need to recreate conditions of very high humidity and high temperatures. This plant needs diffused light conditions and also frequent misting to grow. This is the reason why ghost orchids have been grown inside greenhouses only.