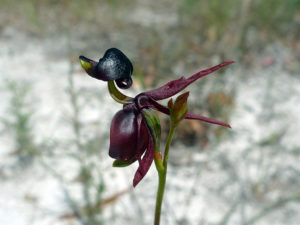 If you have never seen the Flying Duck orchid in real life, you can be forgiven for thinking that it is a fake. This is because it is hard to imagine Mother Nature trying to copy or impersonate one of its own creatures? But it is a fact that the flowers of this species of orchid bear uncanny resemblance to a flying duck. It is a small species of orchid that is found in eucalyptus woodland of Australia along its eastern and southern coastline. The scientific name of this orchid is Caleana Major after the name of a botanist George Caley.

The complex flower of this species of orchid is tiny, only 15-20mm in size. But it has a peculiar shape that makes it look like a duck in flight. Most of the plants have reddish, brown, and purplish flowers even though in some cases these flowers can also be green. Chances are that you may miss out on seeing this species of orchids even after visiting the right places in Southern and Eastern Australia. The peculiar color of the flowers of this orchid makes the plant to mix and blend well with the surroundings. Scientists say that the flower has evolved in such a way so as to help this species of orchids to attract its pollinators. We humans see the head of the flower in the shape of a duck but male sawfly sees it as a female sawfly. It gets attracted to it and makes an attempt to mate with it.

Facts about the Flying Duck Orchid

The flower has a labellum that is in the shape of the beak of the duck. The length and breadth of this labellum is such that it serves as a perfect place for sitting for the male sawfly. As the male sawfly sits on it, it sends signals to the body of the flower to set the trap in motion. This trap makes the insect get into a place and by the time it is free, it has to pollinate the flower. This process of propagation is referred to as pseudocopulation by the scientists. The roots of this species of orchid have a symbiotic relationship with a fungus that is native to the places where it is found in Australia. This is one of the reasons why this unique species of orchid is very difficult to grow inside homes. It is this fungus that protects the plant from several infections. When this fungus is not present in the medium, it is difficult to save the plant from dying down because f these infections.

There are two more petals of this uniquely shaped flower of Flying Duck orchid. Both of them look more like sepals and they are curved back to look exactly like the wings of a duck ready to take a flight. This orchid plant is perennial in nature but it flowers only during spring or early summer.

Flying Duck orchid has the pride of being on the postage stamp of Australia.