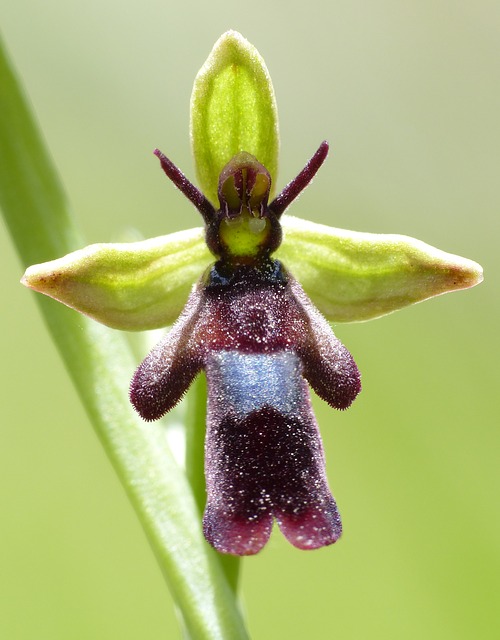 Sometimes nature comes up with ingenious ways to attract pollinators – by sexual deception! Fly Orchids flowers are shaped just like female flies.  Male insects are attracted to the flower so they come to mate. Once they land, pollen gets stuck on their bodies which in turn fertilizes the next orchid that they fly to. The Fly Orchid is one of those species of orchids that is not considered attractive. In fact, many find it an ugly species of orchid. Imagine male insects getting enticed to mate with a flower – that is the power of nature to mimic its own creations! Male flies and other insects do not get what they anticipate when they sit on the flowers of the Fly Orchid.  They are fooled and, as with some other flowers, they do not even get the benefit of nectar as a consolation.

Despite this clever and deceptive way of propagating itself only about 10% of Fly Orchid plants are pollinated by the insects . To combat this low success rate the Fly Orchid has another trick up its sleeve. Every pollinated flower produces more than 10,000 seeds to make sure that the species remains preserved.  It also propagates at a fast pace so that, if only one in 10 flowers gets pollinated, there is still a great chance of success.

Facts About the Fly Orchid

The Fly Orchid is a terrestrial plant that remains under the ground in the form of a tuber until late summer when it starts to sprout.  When the bulbous tuber starts to dry out, for want of food reserves, a cluster of leaves starts to form . Interestingly, the plant begins to develop a new tuber at the same time – perhaps to get itself ready for a new beginning the following year. What is amazing about the Fly Orchid is that the leaves of the plant start to wilt just as the flowers bloom. This makes the stalk look like it is occupied solely by the female flies.

The Fly Orchid is a species of orchid that grows in clusters – meaning you will find 10-15 plants in a colony. You can grow them in your lawn if you keep the plants well drained. The Fly Orchid also likes a relatively alkaline soil and the tubers need to be at least 5cm below the surface of the soil.

Facts About The Fly Orchid