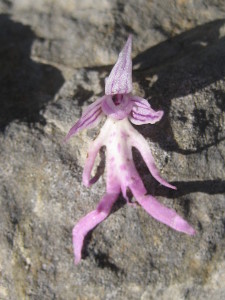 Would you believe that there is a type of orchid flower that looks like a little haning naked man? Yes, it might not be believable but the petals of this orchid actually resemble the shape of a man with arms and legs and even the reproductive organ! If this was not enough, the marks that are found in these flowers make it look like this naked hanging man has a smile and two eyes. This flower is found in clusters making it look like all the men (petals) are hanging, so for this reason the name is hanging naked man orchid.

About the Hanging Naked Man Orchid

In ancient times many people believed that if a plant is in a shape of a body organ, then upon consumption it could provide relief to any problem the consumer may also have in that particular organ. Therefore, eue to its resemblance to the male’s reproductive organ, since the times of the Roman Empire this orchid was used as a treatment for men’s virility problems. As well, it was also used as an aphrodisiac.

The medical use of the hanging naked man orchid does not end with this. This orchid is also known to have anti-flatulent properties (flatulence causing gas in a person’s digestive system). It also happens to have demulcent properties, meaning it will help in smoothing the skin. Besides this, it is also very well known for having nutritive and anti-diarrheal properties (best for children). 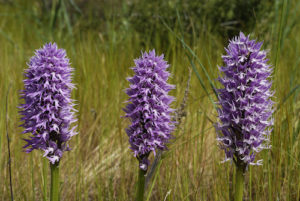 The hanging naked man orchid has a tuberous root which is full of nutrition. The root in question can be dried and then made into a flour like substance, kind of like arrowroot. This powder or flour is known as Salep. In England it is sometimes used as a coffee alternative. However the most popular edible item made by this powder is a drink and it is known as the Turkish Delight.

Because of its use for making Turkish beverages and desserts and other uses in other countries, the hanging naked man orchid has the “threatened status”. Because of this “status” it is illegal for someone to try to export pure salep from regions in or near the Mediterranean or trying to harvest the plant from the wild. However, it is now possible to purchase the seeds of this orchid.

5 thoughts on “Facts About The Hanging Naked Man Orchid”