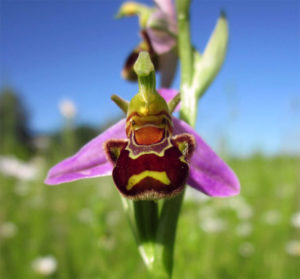 When you see this bee orchid plant it is hard to believe your eyes as this species of orchids produces flowers that resemble bees. What you see is a small fuzzy bee sitting on a flower having three lateral petals. There are two more sepals that are shaped just like the antennae of a bee. However, it is nothing but a trick played by Mother Nature to dupe male bees into thinking they can mate with these female bees. The bees do come but instead of getting sex they play their role in pollinating the plant. The pollen sticks to their body and they transfer it to female plants nearby when they go and sit on their flowers.

The scientific name of this species of orchids derives from a combination of Greek and Latin words. The Greek word Ophrys means eyebrow while the Latin apifera means bee bringing or bee bearing. It clearly refers to the shape of the flower of this orchid that resembles a bee. Bee orchid is a medium sized plant that can grow up to a height of 15-50cm. One can see the plant developing a cluster of leaves during the autumn season. These leaves continue to grow well into the winter months albeit slowly. Be orchid starts to bloom in April and continues to flower till mid July. It exhibits inflorescence with up to 10-12 flowers seen on a single stalk, lined up like bees feeding on the petals spread out laterally.

Bee orchid plant has tubers and a strong network of roots. These orchids love a soil with very high humidity levels. They need the soil to be rich in humus to grow quickly. If you are desirous of growing this orchid in your lawn, make sure that the area is free from herbicides and moss killer as both these easily kill bee orchid. Also, do not use fertilizers on this orchid as it gets nothing out of them but the growth of grass and other wild plants because of fertilizers affects growth of bee orchid.

Facts about the Bee Orchid